The Speed Control window is launched by selecting Speed Ø Add or Speed Ø Edit in the context menu of a timeline video or audio clip. You can adjust the settings to produce any degree of slow motion or fast motion over a wide range. 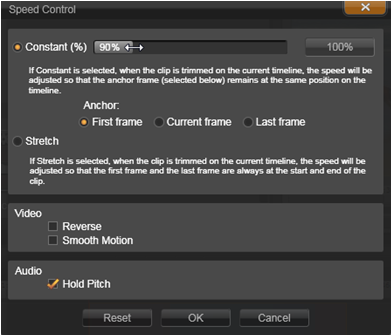 The actual playback speed of your project always remains the same. It is set once and for all by the frames per second rate in your project settings. To achieve slow motion, new frames are interpolated between the original ones; for fast motion, some source frames are suppressed.

The options provided on the dialog are divided into several groups.

Select the clip playback speed as a value from 10 to 500 percent relative to the original material. Anything under 100 percent is slow motion.

Anchor: When Constant is selected, the clip is anchored to the timeline by a specified frame during trimming operations. You can choose the first or last frame of the clip, or the frame indicated by the current position of the play line, to serve as the anchor. This can be useful for coordinating action between the speed-affected clip and material such as background music on other tracks.

Under this option, the first and last frames of the clip as currently trimmed will remain locked when the clip is trimmed on the timeline. Shortening the clip, instead of trimming material from the end, speeds it up just enough so that it finishes at the same frame as before. Lengthening the clip by trimming its end rightwards slows it down rather than exposing any trimmed material.

Reverse reverses the direction of playback without affecting the speed. Synchronous audio, if any, is suppressed with this option, since it is generally undesirable to play sound backwards.

Smooth motion: This option applies a special transition technique to achieve maximum fluidity of movement from frame to frame.

Hold pitch: This option maintains the original pitch of the recorded audio even when it is played back accelerated or slowed. The function becomes less effective the more the speed is changed. Beyond certain limits, it is switched off completely.