Most types of Library asset support previewing in the Browser. The capability is indicated by a preview button on the asset icon, and the presence of a Show preview command on its context menu.

Remember too that most asset types can be previewed on the icon itself with an Alt-click on the play button.

Clicking the preview button in the lower left corner of the asset icon loads the item into the Library Player for viewing. 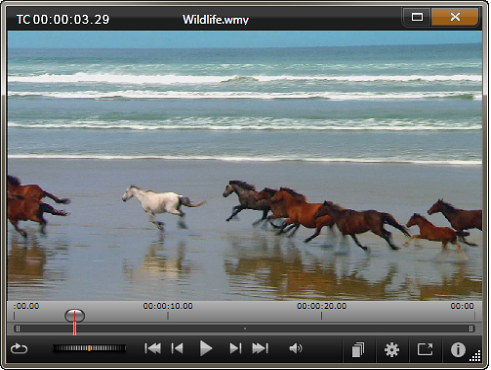 Previewing a video clip in the Library Player window. The transport controls are at the bottom, starting with a Loop button at the far left and a Shuttle wheel. The third in the group of five arrow buttons starts playback. The two buttons on each side of it are for navigating from asset to asset in the Library folder.

Along the top of the Player, the current viewing position is displayed. At the bottom is a toolbar of transport controls and function buttons.

First among the transport controls is the loop button, which causes playback in a continuous loop from the start of the media. Next is a shuttle wheel with which you can sensitively control the speed of playback by dragging backwards and forwards on the control.

The center play button in the cluster of five arrow controls begins preview of the video or audio asset. The two buttons on either side of it are for navigating from the viewed asset to others in its folder. When previewing a photo the play button does not appear; only the navigation buttons remain.

Click the mute button to the right of the transport controls to toggle the audio associated with the clip. A volume slider appears next to the mute button when the mouse is over it.

Some buttons in the final group at the bottom of the Player appear only with particular asset types. A video file uses all four types, in the order shown and described here.

Show Scenes: This button activates a mode in which the Browser displays a separate icon or text record for each scene in the video file. (As explained under Video scene detection, a scene in the most general sense is just any portion of a video file.)

When Show Scenes is active, the neighboring Open in media editor button is removed, and a Split scene button takes its place. This allows you to define your own scenes instead of, or as well as, relying on the automatic scene detection feature.

Open in media editor: The media file is opened for editing in the correction editor appropriate for its type.

Full-screen: The preview is shown in a special full-screen window, with its own basic set of transport controls. To close the full-screen display, click the close button in the top right corner of the window, or press Esc. 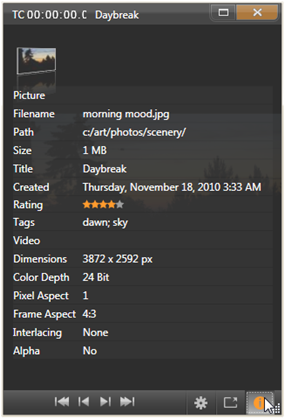 Here, data regarding a Library asset, a photo, is displayed in the Information view of the Player. Click the Info button again to return to the Playback view.