The options provided in the Mode panel for both DV / HDV and analog import include access to this window for configuring scene detection preferences. 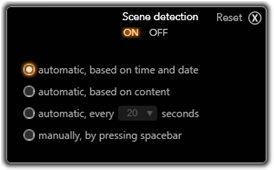 The Scene Detection Options window for DV or HDV import. When importing from analog sources, only the last two options are supported.

Automatic scene detection is a key feature of Studio when working with DV and HDV sources. As video capture proceeds, Studio detects natural breaks in the video and divides it up into scenes. Scenes can be independently viewed and managed in the Scenes view in the Library.

Depending on which capture device you are using, automatic scene detection is carried out either in real time during capture, or as a separate step immediately after capture is completed.

The four scene detection options are:

·    Automatic based on shooting time and date: This option is available only when you are capturing from a DV source. Studio monitors the time stamp data on the tape during capture, and starts a new scene whenever a discontinuity is found.

·    Automatic based on video content: Studio detects changes in the video content, and creates a new scene wherever there is a large change in the images. This feature might not work well if the lighting is not stable. To take an extreme example, a video shot in a nightclub with a strobe light would produce a scene each time the strobe flashed.

·    Create new scene every X seconds: Studio creates new scenes at an interval you choose. This can be useful for breaking up footage that contains long continuous shots.

·    Manually, by pressing spacebar: Select this option if you want to monitor the entire capture process and decide for yourself where scene breaks should occur. Press the [Space] key each time you want to insert a scene break during capture.