The Audio Editor provides tools for previewing, analyzing and manipulating digital audio from wav, mp3 and other file types. It includes special features for the original or synchronous audio track created during video recording.

For the general interface of the Audio Editor and the other media editors, please see Media editing overview. 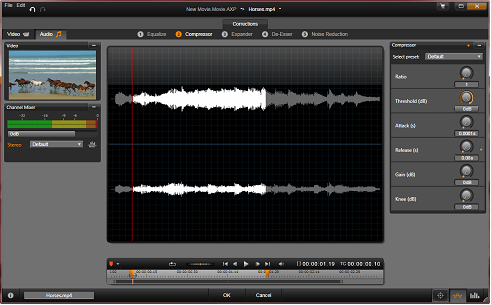 Trimming and editing the stereo soundtrack of a video clip. At left is a video monitor panel and the channel mixer. The darkened portion of the waveform (center) represents material removed from this stereo sound by trimming on the timeline at bottom. The Compressor correction filter has been applied (right).

When opened from either the Library or the project timeline, the Audio Editor provides access to a suite of correction tools for overcoming common flaws such as excess sibilance in recorded speech. If you are editing a Library asset, any changes you make will be preserved when it is later used in a project. Changes to a clip on the timeline, however, have no impact outside the project to which they belong.

For information about opening the Audio Editor to access the correction tools, along with general functions of the media editors, please see Media editing overview. For descriptions of the tools themselves, see Audio corrections.

As just mentioned, when the Audio Editor is opened from the project timeline, it provides a set of correction tools whose main purpose is to repair defects in media. These tools can be applied directly to assets in the Library as well as clips in the project.

With timeline clips only, the Audio Editor also provides a set of audio effects. These afford a wide range of possible ways to adjust or enhance your clips. Please see Audio Effects for details.

The channel mixer allows you to make level adjustments and redirect audio signals from their original channel assignments to new ones. For instance, you can use the mixer to condense separate stereo channels to a left or right mono channel.

The mixer panel originally opens in the left-hand column of controls, but can be dragged to a new docking position at either side of the window. Other panels will reposition themselves as needed while you drag.

If you need functions the channel mixer does not provide, consider applying the Channel Tool effect to the clip.

Level adjustment: Click on the slider under the level meters to set the playback level of the clip. The level you set will be used whenever this clip is played or used in a timeline. The red area on the meters represents overmodulation of the sound and should be avoided if possible. To determine the maximum level you can safely use, click the normalize button.

Channel routing: This dropdown list contains all options for redirecting audio signals, such as a channel exchange (left interchanges with right, for example), or combining a two-channel stereo signal onto one mono channel. The 1:1 routing option routes the audio signal without changes. 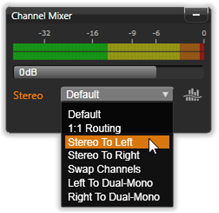 Selecting a Channel Routing option in the Channel Mixer. Just above the list is the Level Adjustment slider (at the default setting of 0dB). To the right of the list is the Normalize button.

Normalize button: The normalize button examines the audio samples in the loaded sound to determine the amount of uniform increase that can be applied without overmodulation (harsh digital clipping) of any sample. Unlike compression and limiting, which modify the dynamics of audio material, normalization preserves dynamics by uniformly increasing (or decreasing) amplitude.

The waveform graph of the audio is shown in the central display. It shows statically how the amplitude of the sound changes with time. If you zoom in on the sound as far as possible, the vertical lines on the graph indicate individual sound samples. The waveform graph is also seen in the Library (‘source’) Player when an asset is selected. 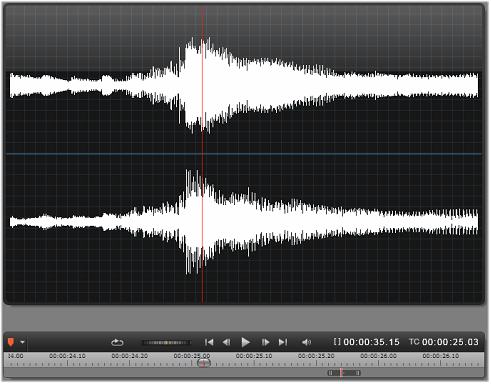 The waveform graph shows the change in audio levels over time. For stereo recordings, the graph is horizontally divided as shown here, with the left channel uppermost.

An alternative, dynamic view of the same audio material is given by the frequency spectrum display, which shows the changing spectral composition of the sound as it plays back.

The waveform and frequency buttons at the lower right of the Audio Editor let you switch between these complementary displays at will. 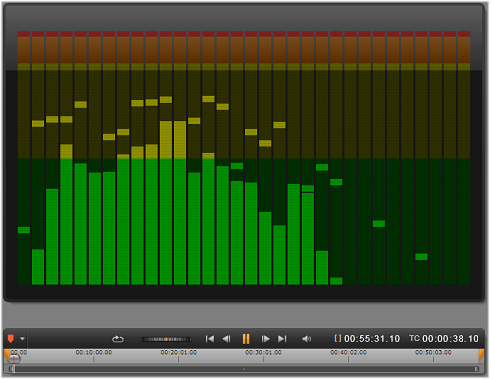 The frequency spectrum breaks down the audio signals by frequency bands, showing the sound level in each band. Lower frequencies are on the left. Peak levels are shown as a small box above each main bar for which a peak has been detected in the past few seconds.

If you are editing video that has a synchronous audio track, both video and audio editing facilities are available through the Video and Audio buttons at the top of the window. While you are in the Audio Editor, a video monitor panel is also available.

If video is available, a tab is provided at the top left of the screen for switching to the Video Editor.

If synchronous video exists for the currently-selected audio, a small video preview panel opens at the upper left of the Audio Editor. While you are previewing the sound, the video monitor lets you follow the action visually as well. If you switch to the Video Editor, you will see a waveform display panel at the same screen location.