The Corrections within the Photo Editor are Enhance, Crop, Straighten and Red-Eye.

This area includes tools for fixing problems to do with color and illumination.

This control increases the difference between the light and dark areas of an image. Boosting the contrast may enliven a dull photograph, although at the risk of losing definition in areas that are already very bright or very dark.

The color temperature control changes the color composition of an image to make it seem ‘warmer’ or ‘cooler’. Indoor lighting such as a tungsten bulb or candlelight is perceived as warm, while daylight, especially shade, is perceived as cold. Using the temperature control primarily changes the yellow and blue values in an image, with little effect on green and magenta.

This control functions like the brightness button on a television. It impacts the light and dark areas of the image equally. For finer control in brightness editing, use Selective Brightness instead.

This control regulates the color intensity of an image. Increasing the value pumps up the colors, making them more vivid, or even lurid. Decreasing the value drains the image of color until at zero only shades of gray remain. For finer control of saturation, use Selective Saturation instead.

Poor white balance is detected when supposedly white areas of an image bear a slight tint or color cast. To correct this, you adjust the image spectrum with two controls.

Gray-scale picker: Activate the picker and click in a nominally white or gray area of the image, where no coloration ought to be present.

Color circle: Slide the control point from the center of the color field until the undesired tint is removed from the image.

To enable you to edit particular brightness zones in an image without impacting others, five separate brightness controls are provided:

Blacks: This slider affects only the darkest areas in the image. For best results, leave editing both Blacks and Whites until last.

Fill light: Increasing this slider may produce better detail in shadowy (but not black) areas of a full-contrast photograph.

Midrange: The zone impacted by this slider includes the entire medium range of illumination.

Highlights: This slider affects the bright locations in the image. It can be used to mute areas overexposed due to flashes, reflections or brilliant sunshine.

Whites: This slider impacts the parts of the image that are considered ‘white’. Edit Whites and Blacks last.

Whereas the standard Saturation correction increases color saturation equally across the entire spectrum, Selective saturation allows for individually boosting or suppressing the primary and secondary colors. For example, if blue appears to be too strong, it can be turned down while other colors retain their intensity.

This panel of additional controls provides a number of useful functions.

Exposure: This simulates the effect that would have been produced by increasing or decreasing the image exposure (the total amount of light used to create a photograph).

Soft clipping: Soft clipping attempts to recover lost detail at the top and bottom of the luminance range and at the top of the saturation range by reducing extreme highlights, blacks and saturation.

Blend with original: This slider mixes the original image (in its initial position) with the changed one (0 to 100%).

CCIR Limits: This setting limits the color values used in the image to the range for TV video signals permitted by the CCIR (Comité Consultatif International des Radiocommunication).

Use this tool to emphasize a specific section in an image, or to remove undesired components. 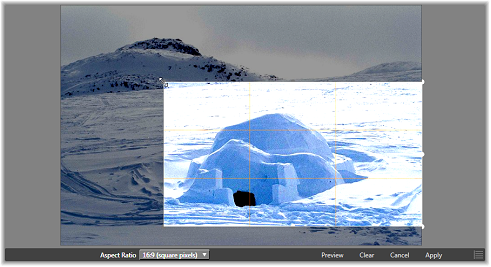 Bounding box (cropping frame): After you select the cropping tool, a resizable frame is placed over the image. Drag the sides and corners of the frame to crop the image, or drag the center of the bounding box after cropping to adjust its position.

Aspect ratio: The Aspect ratio dropdown on the control bar can be use to ensure that the crop rectangle maintains a desired standard proportion while being resized. Standard (4:3) and wide (16:9) frame aspect ratios are supported.

Preview: This function displays the cropped image without the surrounding material. Press Esc or click the image to return to the editing view.

Clear, Cancel and Apply: Clear returns the bounding box to its original dimensions; Cancel closes without saving any edits made; Apply saves the changed image without exiting the editor.

This correection enables you to straighten an image in which elements that should be exactly horizontal or vertical are visibly tilted. Unless you have cropped the image, it dynamically resizes as you rotate to keep the corners from being visibly cut off. With a cropped image, no resizing takes place as long as there is sufficient excess material to fill in the empty corners. 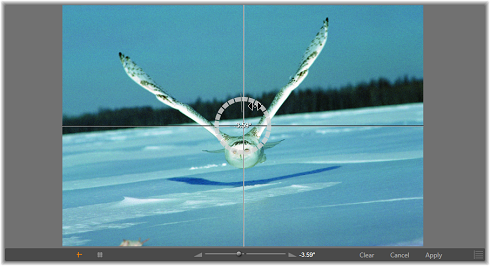 Ready to straighten an image (with crosshairs).

Several functions pertaining to Straighten are provided on the toolbar below the preview.

Guide line options: The two buttons at the far left of the toolbar set the mode for the lines that are superimposed on the preview as a guide to straightening. Selecting either button deselects the other. The Crosshairs (leftmost) button adds a pair of crossed lines that can be dragged with the mouse to serve as a reference for true vertical and horizontal alignment anywhere in the image. The Grid button produces a fixed, repeating grid pattern over the entire image.

Set angle: To set the degree of rotation you can either use the slider on the toolbar below the image, or click and hold the left mouse button while dragging over the image. Rotations up to 20 degrees in either direction are supported.

Clear, Cancel and Apply: Clear sets the image back to its original state; Cancel closes without saving any edits made; Apply saves the changed image without exiting the editor.

This tool corrects the red-eye effect that often occurs in flash photography when the subject’s gaze is towards the camera. Mark the area around both red eyes with the mouse. Extreme precision shouldn’t be necessary, but you can experiment with changing the area slightly if you are dissatisfied with the correction.

Clear, Cancel and Apply: Clear sets the image back to its original state; Cancel closes without saving any edits made; Apply saves the changed image without exiting the editor.