With the advent of DVD, Blu-ray and AVCHD discs, video technology has developed into an interactive medium that gives both the videographer and the audience new possibilities.

In a disc project you can go beyond the old idea of creating a movie to be viewed in strict sequence from beginning to end. Now the audience themselves can decide which parts of the production to view, and in what order.

Disc authoring is the process of designing and creating the structure that allows this interaction. Avid Studio provides automated features that make authoring easy while still giving you full control. 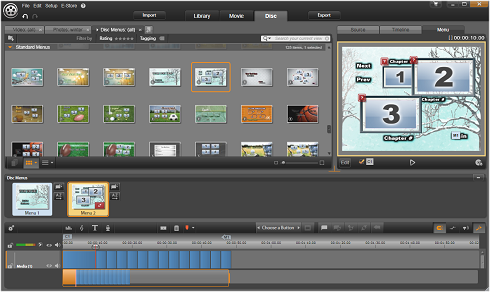 The Disc Editor in Avid Studio. Here, two menus have been added to the Menu List, and are now available for use. The Player (top right) in this window provides a special mode for editing the behavior of menu buttons.

The upper part of the Disc Editor screen includes two functional areas: the Compact Library, from which disc menus and other resources are drawn; and the Player, where you can preview menus and other media and edit menu interactions.

Next below these is the Menu List, where the your project’s menus are stored. At bottom is the timeline for the media that will be the primary content of your disc. Both of these use the full width of the window.

ð Menu editing on the timeline